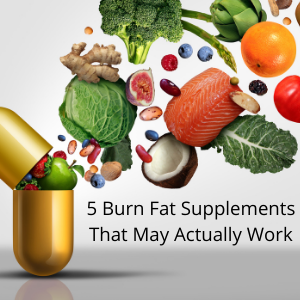 What, if all you had to do, was take a pill and you could look exactly how you wanted. It might sound ridiculous, but stats show that Americans alone spend about 2.1 billion dollars a year on weight, loss, pills, capsules and soft gels. So what are the 5 Burn Fat Supplements That May Actually Work

Unfortunately, the truth is that anyone promising quick and easy fat loss in a bottle is most likely not telling the whole truth for true, effective and sustainable fat loss. You will have to adopt more of a fit lifestyle by exercising and eating a healthy diet.

There’s no way around that, but there are some natural supplements out there that can help reduce your hunger and appetite increase your metabolism and help you burn more fat when they’re added to a solid diet and workout plan, and The thing is, everyone needs to recognize that there are lots of supplements out there, that people use that aren’t very natural or can potentially even be harmful.

For example, a common supplement that’s, thought to be relatively harmless, is known as CLA or conjugated linoleic acid. Even though it’s been used for years. Cla is actually trans, fat and trans fats are not good for people to consume, especially for long lengths of time.

Many people take cla on a daily basis, not realizing that it can contribute to long-term side effects like fatty, liver, insulin, resistance and increased inflammation. So today I want to go over five very natural and safe fat burning supplements that you can take that are actually proven to work and the first one is glucomannan.

By far, the best way to burn more fat is to decrease the number of calories that you eat on a daily basis. However, when you force yourself to eat less and less, it becomes harder and harder over time to stick to so any natural supplement that can help decrease our appetites without us having to forcefully restrict makes fat loss feel a whole lot easier and more natural, and that’s exactly what glucomannan does it’s, a type of fibre that comes from a unique looking yam known as the elephant? Foot yan fibre, especially soluble fibre, has been shown in multiple studies to fill the stomach and decrease appetite and hunger.

This may be due to the fact that glucomannan is one of the most viscous fiber sources we know of which means that it takes up a lot of volume due to its exceptional ability to absorb water. It can literally absorb 50 times its weight in water when glucomannan mixes with water and enters the stomach.

It becomes gel-like and digests slowly. This occupies space in your stomach, helping promote the feeling of fullness. It only takes a small amount to fill you up and it’s already, naturally very low in calories.

All you need is two to four grams a day, and ideally you would want to have about one gram, 30 to 60 minutes before each of your meals, three to four times a day. You can also add glucomannan while eating your meal or simply sprinkle it.

On top of your food as well, but this has not been proven to lead to weight loss so try having it before your meals just remember to also drink one to two glasses of water. Every time that you take a gram of glucomannan next is green.

Tea extract: this is basically a concentrated form of green tea that usually comes in a capsule. The biggest benefit for weight loss purposes comes from a compound found within the green tea known as egcg or epigallocatechin galli.

Another benefit is that it can assist with fat mobilization. This is one of the very first steps of fat burning where your body breaks down fat and moves it into your bloodstream to deliver the fatty acids to the cells where they need to be burnt off for energy.

Green tea extract is believed to help this process along. This is because egcg can help block a certain enzyme that’s, responsible for breaking down a fat burning hormone known as norepinephrine. So, by blocking that enzyme, it causes an increase in norepinephrine, which benefits fat loss.

Egcg also has other positive effects for your body composition, for example, in a study where mental green tea extract before exercise the researchers found that they were able to burn 17 per cent more fat than other men who took a placebo, which led the researchers to conclude that Green tea extract can enhance the fat-burning effects of exercise and improve insulin sensitivity.

The one problem is that for most people it’s, just plain difficult to get enough egcg by just drinking green tea alone. But the good news is that it’s a whole lot easier. When you’re, having a concentrated dose in supplement form to get the full benefits, you would take 250 to 500 milligrams of green tea extract per day, or, if you really don’t want a supplement.

You can also drink three to five cups of green tea per day to get a similar dose of egcg now, something that has been shown to further enhance the effects of green tea is caffeine, which is actually next on our list.

Even on its own, caffeine will increase your heart rate and boost your metabolism. This is why caffeine is one of the most common active ingredients found in most over-the-counter fat burning supplements when caffeinated coffee was compared to decaffeinated coffee and studies.

The participants that drank caffeinated coffee experience a 16 increase in their metabolic rate for one to two hours after drinking the coffee. So just by having a couple cups of coffee per day, you can boost your metabolism in a pretty big way.

On top of the metabolic boosting effects of coffee, there is some evidence to suggest that it can greatly reduce your appetite as well. A number of studies were reviewed on this topic in a meta-analysis, and they found that coffee could help reduce appetite anywhere from half an hour to four hours after consumption.

It also found that, somewhere between three and four and a half hours after drinking the coffee, the appetite suppressant effect started to wear off. This means that coffee may help you reduce hunger for three hours after drinking it, and this effect may last all the way up to four hours.

Surprisingly, however, the appetite reducing effects may have nothing to do with the caffeine. This was discovered in another study where the participants drank either regular, caffeinated coffee, decaffeinated, coffee, a placebo drink which was water or water, with caffeine, added to it and, interestingly enough, the decaffeinated coffee reduced hunger, the most regular coffee with caffeine reduced hunger, the second most meanwhile, Water with the caffeine didn’t reduce hunger at all.

This shows that there may be something in the coffee itself that reduces hunger and it doesn’t seem to be the caffeine more research on this is required, but this could be because the decaffeinated coffee raised the hormone known as peptide yy much higher.

This is a hormone that is released in your intestines and it happens to lower appetite and hunger, so the bottom line is drinking either. Decaffeinated, coffee or regular coffee will help boost your metabolism and can help suppress your appetite.

Protein has proven benefits for weight and fat loss. For example, it offers one of the best natural ways to boost your metabolism due to the thermic effect of foods. Digesting protein requires your body to use a lot of energy.

In fact, digesting it will burn off 15 to 30 percent of the energy that the protein source provides. It’s also, once again very effective at filling you up and decreasing your appetite. It does this by increasing certain satiety hormones like glp1, cck and pyy.

Protein increases these fullness hormones, while simultaneously decreasing your hunger hormone, called ghrelin now to actually help more with fat loss when using protein shakes. It’s, important that you’re using the right protein powder and that you use it as a replacement for a high fat or a high carb, snack or meal.

Now, while most people use whey protein for effective appetite control, casein protein powder will do a much better job than whey. This is because casein can take up to three to four hours to fully digest helping you feel full for longer.

Meanwhile, whey protein can be digested in as little as 20 minutes so having casein at night before bed can really help prevent late night snacking. If you don’t believe me just try it as soon as you start drinking it.

You’ll, be able to tell right away how thick and filling it is. Last but not least, on our list of natural fat burning supplements, we have cayenne pepper capsules. Capsaicin is the active ingredient in cayenne peppers that leads to the beneficial effects that chili peppers provide for fat loss.

One of the main benefits for fat loss is that it can once again decrease your appetite and, like i’ve, said over and over. If you lower your appetite and skip a few snacks, you’ll, save hundreds of calories, which is way more than anything.

You’ll, be able to burn off with supplementation after consuming those calories. A study from the british journal of nutrition found that eating just 10 grams of red chili peppers, reduced appetite and thereby reduced caloric intake.

There are also other studies that support these findings. That capsaicin can help reduce appetite and increase satiety. It can also lead to improvements in metabolic health. Capsaicin increases the metabolism by activating brown, adipose tissue or brown fat and brown fat appears to have the ability to use regular body fat as fuel in order to generate heat.

Another benefit of capsaicin is that evidence shows that it can promote more fat oxidation with exercise in one japanese study. Researchers found that consuming 150 milligrams of capsaicin an hour before working out increased fat oxidation by about 40 percent compared to the placebo.

Other studies also support similar findings now before taking these keep in mind, even though cayenne pepper capsules can help you avoid the spicy tingling sensation in your mouth, your body will still feel the heat when digesting them, but it is something that you’ll, Become more familiar with over time, so those are the five best natural fat burning supplements that offer benefits for your metabolism and appetite with virtually no side effects.

I know it would be much more exciting if i mentioned something like a magical car blocker that lets you eat all the carbs. You want without storing them as fat, but those pills actually do exist. However, the truth is that they don’t work.

Truly, your best bet is to focus on natural foods and supplements that help reduce your appetite, because that will save you the most calories leading to faster fat loss. I hope you guys enjoyed this video if you have make sure you subscribe to my channel and remember your diet and your workout plan will have the biggest impact on how fast you burn body fat.

So if you want to skip all the trial and error and get a done-for-you diet plan, that’s, customized based on your body as well as a recipe book and a 42 day, workout plan that can be done at home or in the gym And, of course, it all comes with an accountability coach to mentor and guide you through the entire process.

Hope you enjoyed and got something out of this 5 Burn Fat Supplements That May Actually Work. But don’t forget they are only their to help with a good healthy calorie-controlled diet

Disclaimer: Health supplements are not a substitute for medical problems and their only to help lose weight faster Your items have been added to your basket.